Want to know a secret? Restaurants cook bacon in the oven. It’s certainly the most efficient way of cooking lots of bacon, but that’s not the only reason they do it.

Even though I’m not cooking for dozens of people each morning, it often feels like I am. And oven bacon is the choice in my household. We’ll get into why oven bacon is better than stovetop or microwave bacon, and how to cook bacon in the oven, below.

Why You Should Cook Bacon In OvenPin

I’ve spent a lot of time working in restaurants and hotels. And I’ve noticed that almost all restaurants cook their bacon in the oven. Though volume is one of the biggest reasons they do this, there are several other reasons too. Here are just a few:

This makes sense for restaurants, but it also works well at home. Many of us have busy schedules, children needing attention, and phones to answer. Cooking bacon in the oven helps make a hearty morning meal easier by allowing you to step away while it’s cooking. We can all appreciate better time management in the AM. 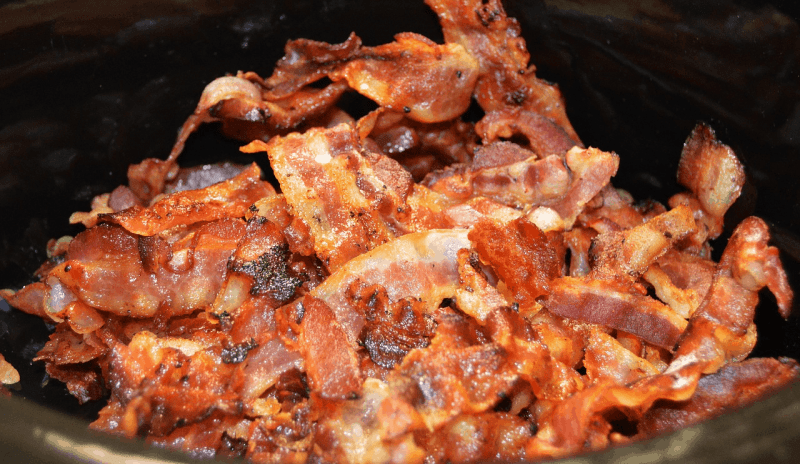 How To Make Bacon In The Oven

Some would say there is no best way to bake bacon, as it’s a fairly straightforward process. However, details matter. You’ll need to know how long to bake the bacon, the ideal oven temperature, and so on.

It may be a straightforward process, and you’re less likely to burn bacon in the oven, but that doesn’t mean it can’t happen. Other than that, bacon can come out chewy and dry if it’s not made at the right temperature. We believe the ideal bacon is not too crisp, but not too soft. For evenly cooked, perfect bacon, read on to learn how to bake bacon properly.

1. Get The Oven Really Hot

Believe it or not, bacon does better in a hotter oven. In fact, most foods do. Most of us instinctively set our ovens to 350 degrees. Likewise, most of the time your oven is preset to 350 degrees as soon as you hit “bake”. But after living with a chef and working with many, I’ve learned otherwise. Crank up the heat and see even better results, especially where bacon is concerned.

Set your bacon oven temp to 400 degrees Fahrenheit. Then wait for the oven to heat up completely before putting the bacon in. Foods react to their environments, especially to heat. A preheated oven makes sure that the bacon (and any other food) cooks properly, and faster as well.

2. Put Bacon on a Cooling Rack

Mentioned earlier, putting bacon on a raised rack helps it to cook evenly, and keeps it from swimming in fat. Some people may say that’s what makes bacon so delicious. But there is still plenty of flavor in oven bacon. Place the rack on a foil-covered baking sheet with edges to keep oil from dripping off the tray..

You can add flavor to your bacon with black pepper, maple syrup, or brown sugar. If you do, this is the best way to make sure it’s not overpowering. It also ensures that the flavor is consistent, and the bacon won’t caramelize and burn before it’s fully cooked. 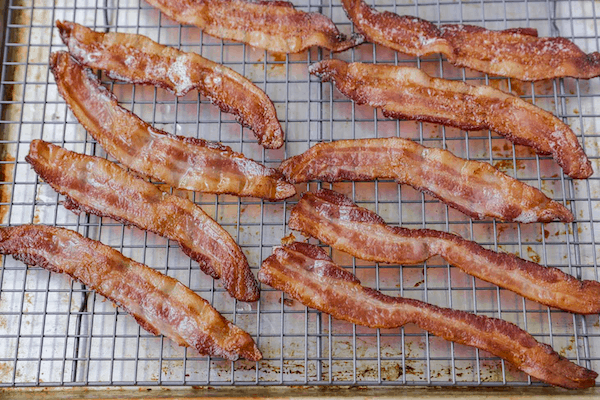 You can set a timer for fifteen minutes, but check on the bacon every five, at least. Do this through the oven window or only a slight gap in oven door to retain the heat. With so many different types of bacon, cut to different thicknesses, they will cook at different rates. In addition, all ovens are slightly different, which will alter the cooking time.

By checking your bacon regularly, you have control over how crispy you let it get. Once the bacon reaches your desired crispiness, pull it from the oven and let it sit for a few minutes. This ensures that all of the residual fat drips off the bacon and onto the tray.

Oven-baked bacon is easy, time-efficient, and delicious. Just put it on a rack at the right temperature, and you’re well on your way to a tasty breakfast.

Now that you know how to make bacon in the oven, you can explore more delicious breakfast recipes. Try sausage blueberry bake, spicy sausage balls, or apple cinnamon granola. At Teaspoon of Goodness, we have dozens of breakfast recipes, desserts, dinners, cooking hacks, and much more for you to explore.

Find your favorite breakfast recipes and cooking tips at Teaspoon of Goodness.